Where it all began

Converted an old desktop into a NAS, using FreeNAS (before the name changed to TrueNAS). The system is pretty janky, consist of the following: 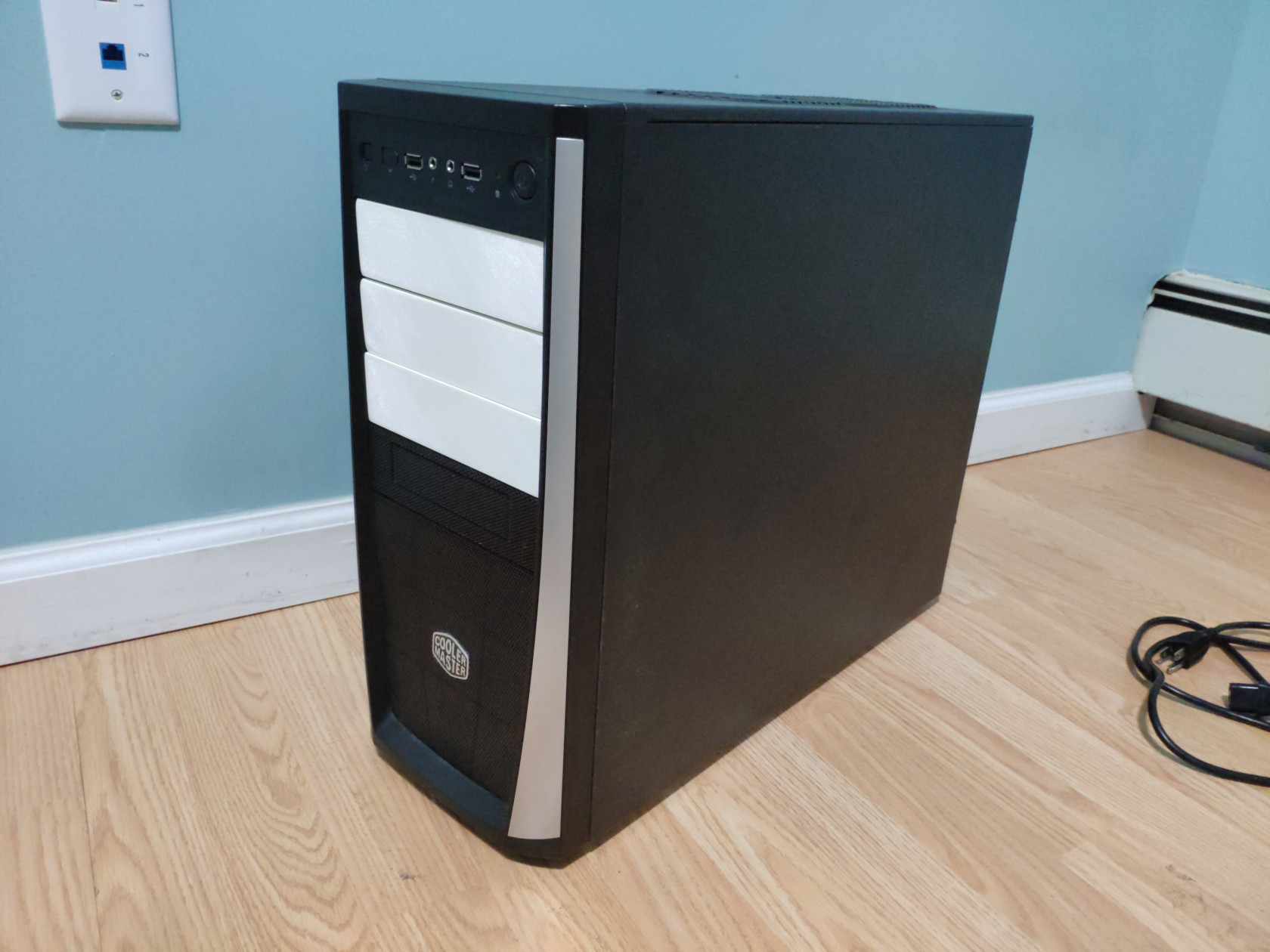 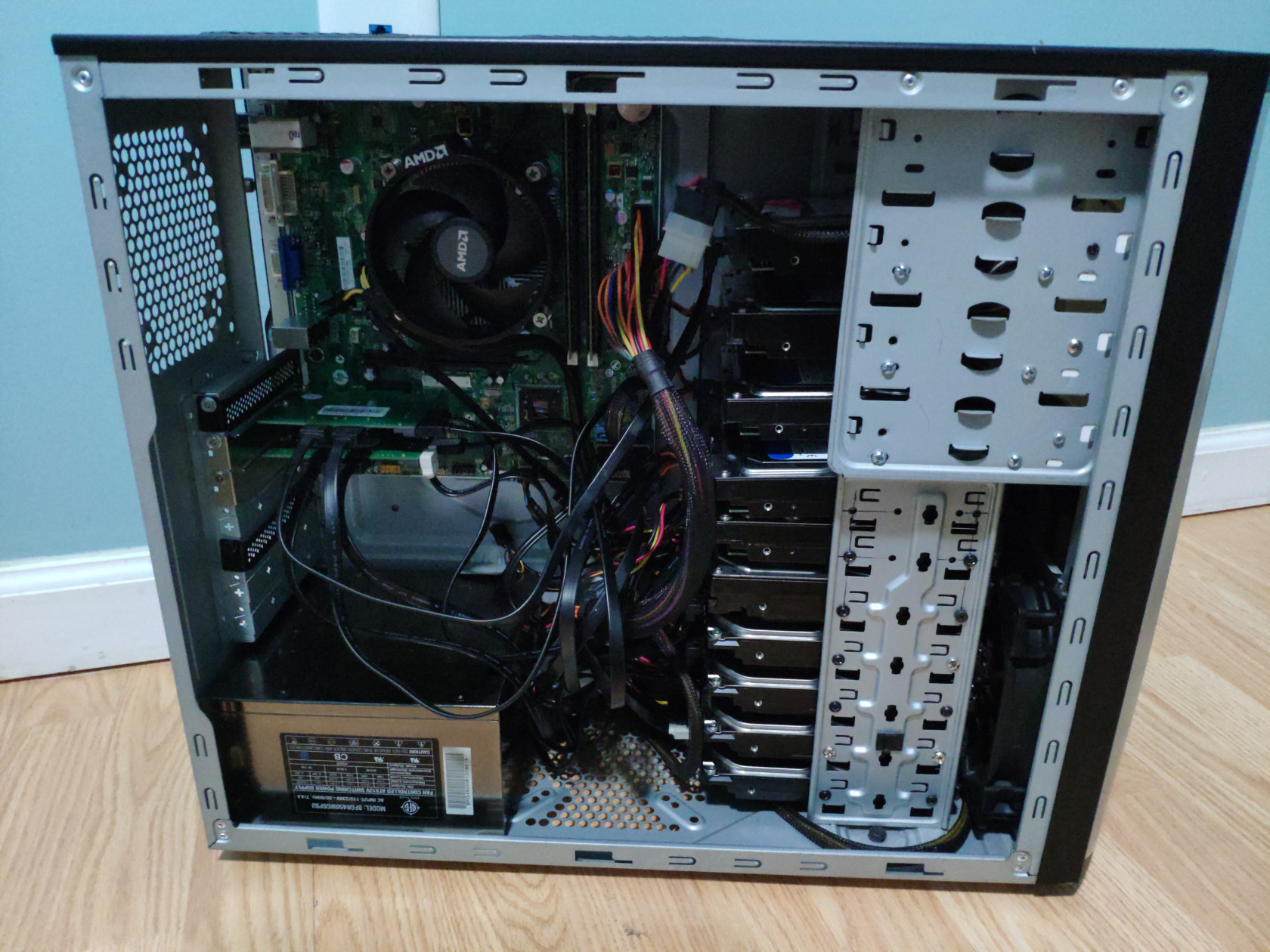 For the pfSense Firewall, it started out as an HP Elitedesk desktop, with holes cut in the front for the Ethernet NICs.

This was running on: 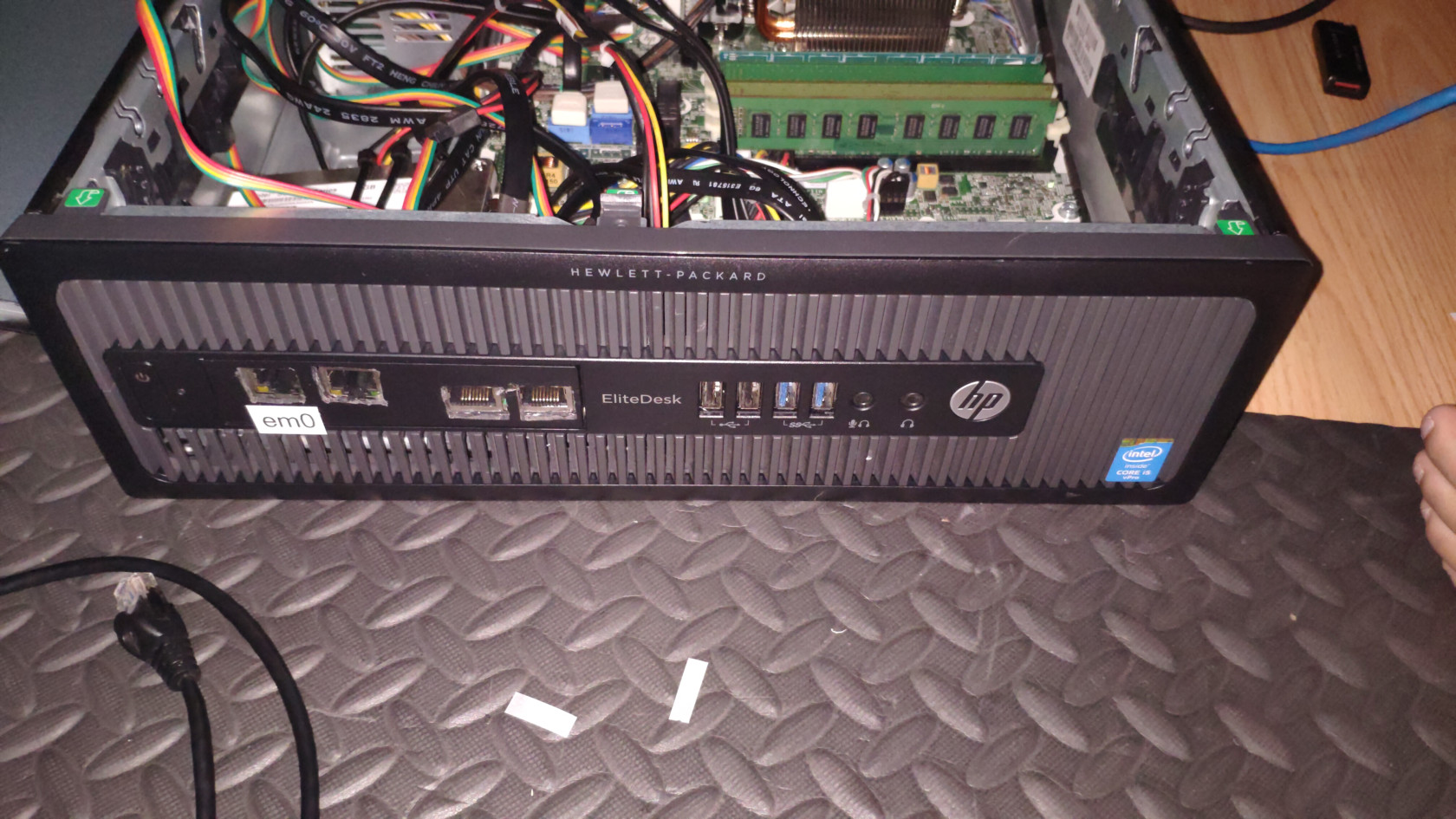 Over time, as I accumulate more and more consumer hardware, my home lab grew and changed. Below is the upgraded janky hardware for FreeNAS:

It was also around this time I added an UPS to the setup (at last) to protect against random, momentary power outages. 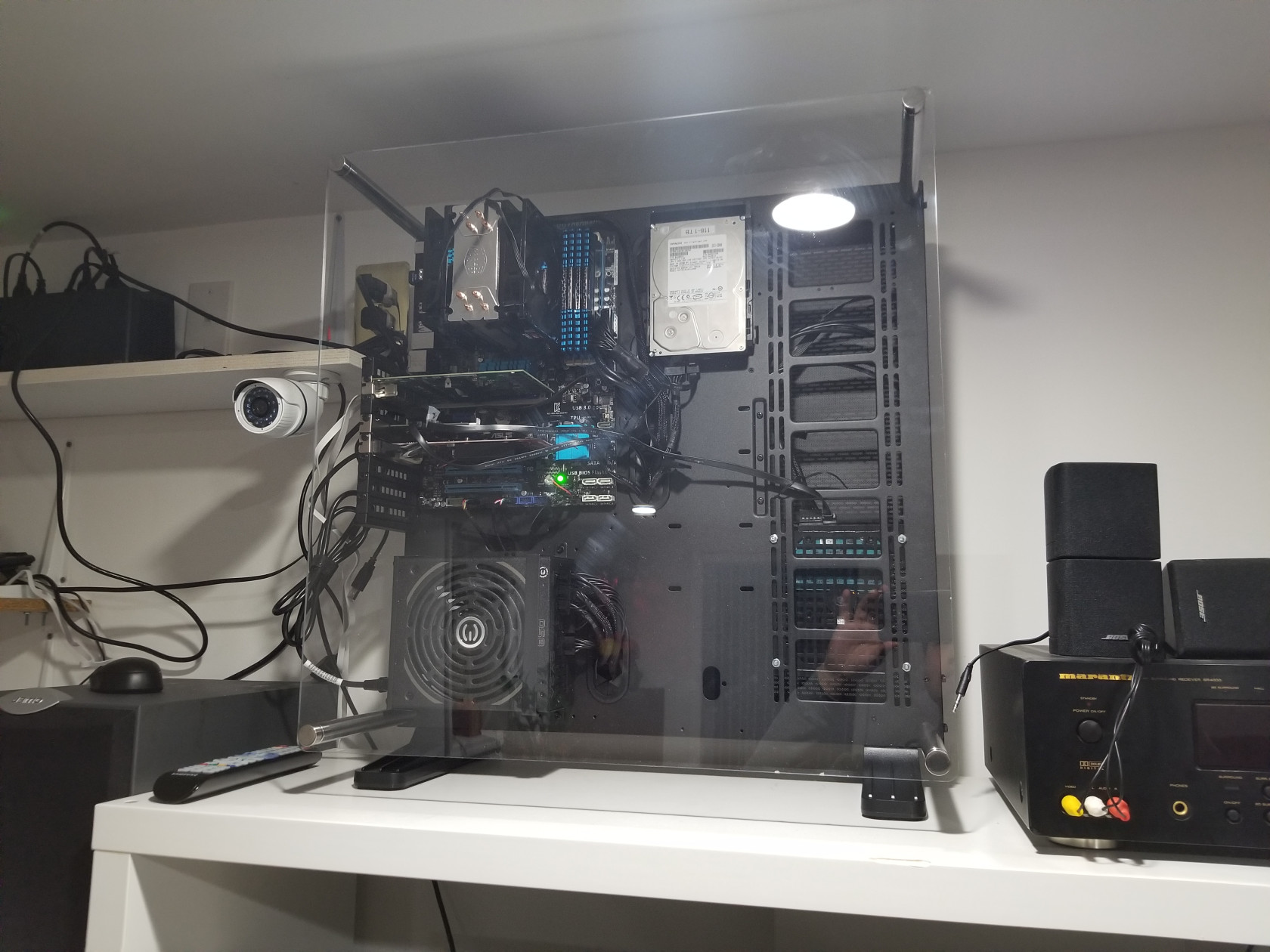 As I learn more and more about IT, I was slowly reaching the limit of the consumer-grade motherboards in my homelab. Around this time, I found a great deal on an AsRock Server motherboard, And so it begins my next phase of Homelab, where I use server grade hardware in a DIY mounting solution. Very jank. This time, the server runs ESXI (free license) as the hypervisor, with everything else virtualize underneath.

For networking, pfSense was transfer to a small NUC-like device, from Qotom Mini PC. I have also acquired a 16-Port gigabit Netgear Smart Switch that have basic VLAN functionality to start learning about VLANs.

Server case was too expensive at the time for me, and I had a lot of scrap wood around. So I decided to build a hanging wooden "case" to house the server on. 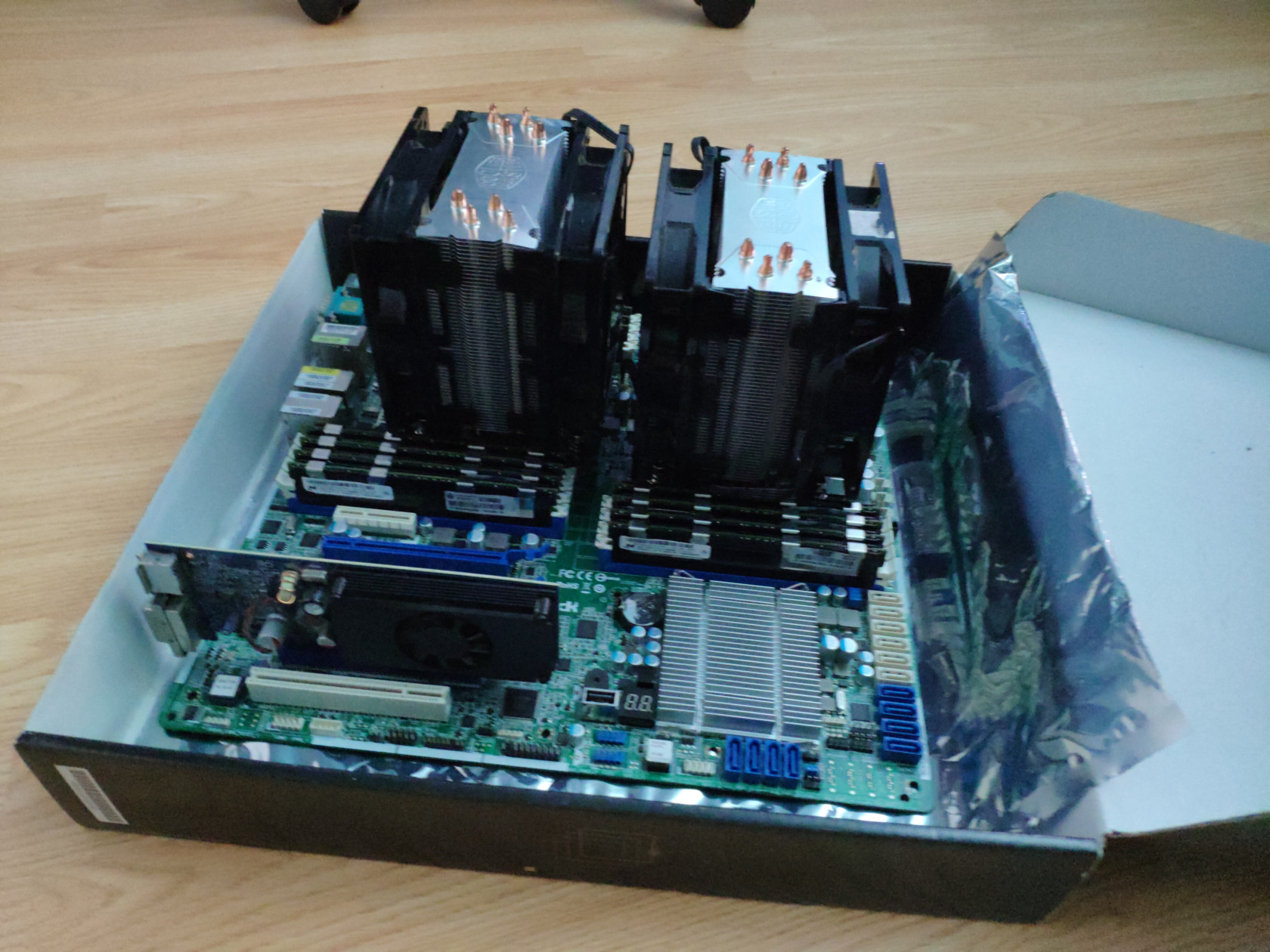 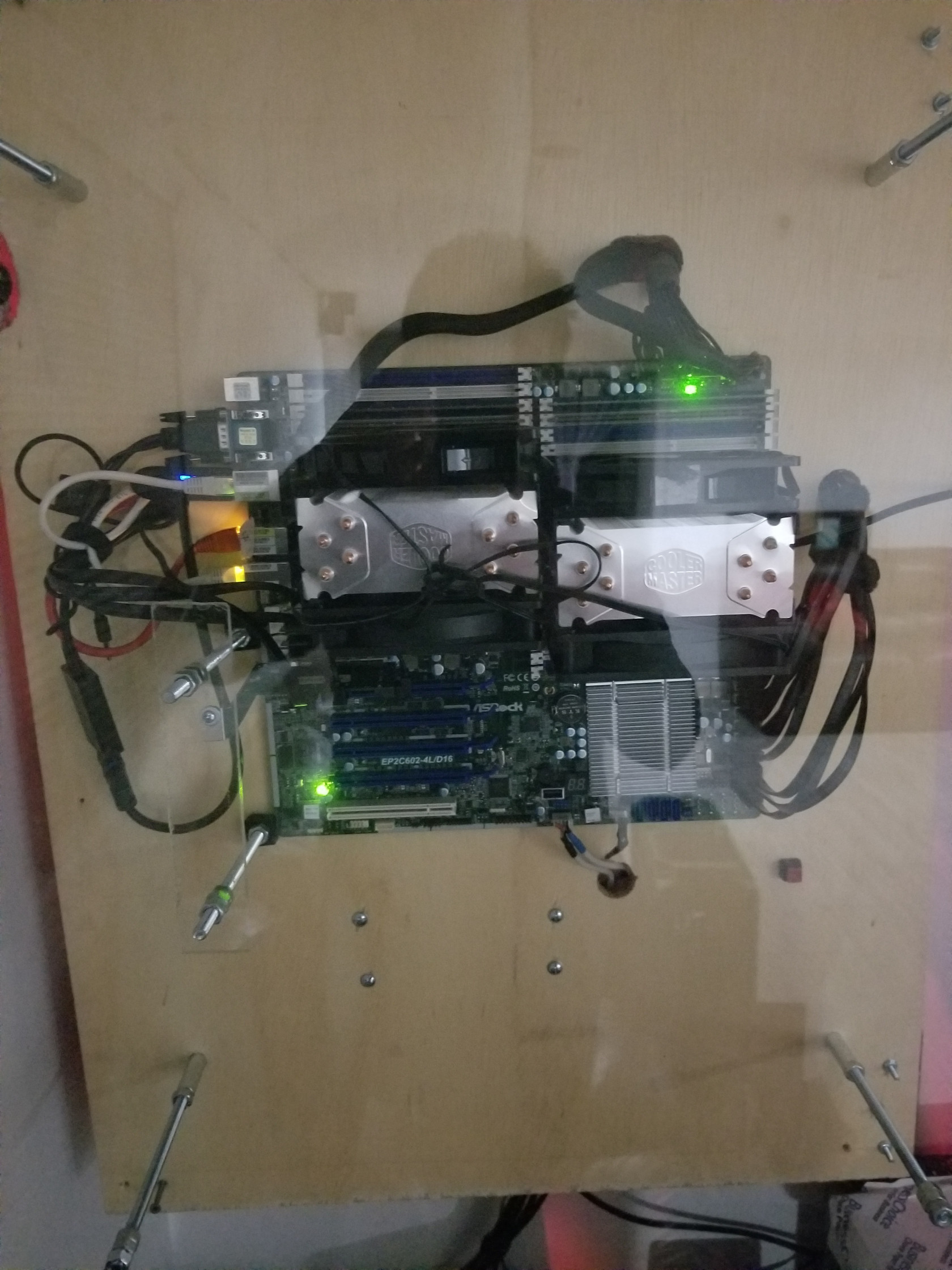 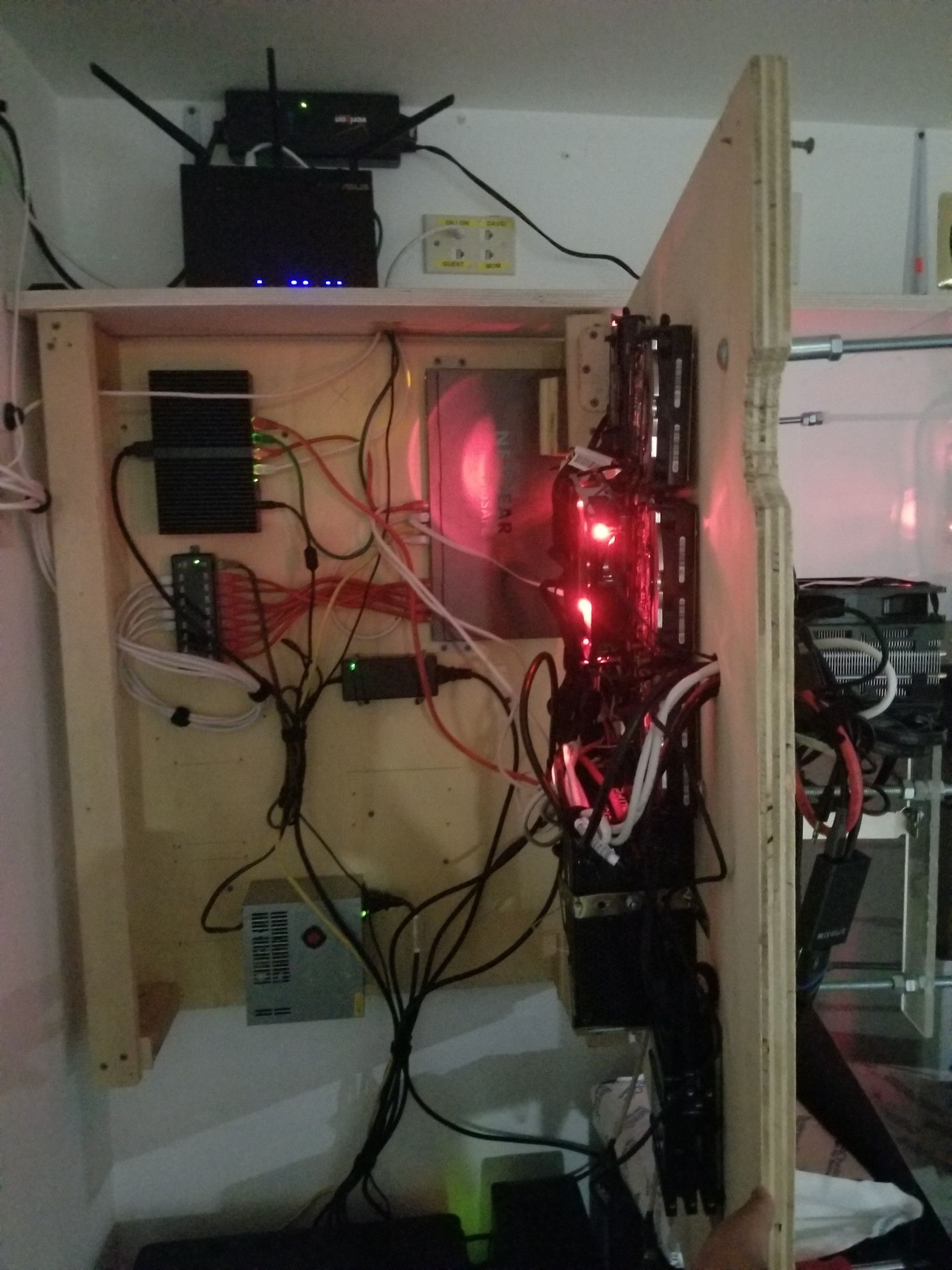 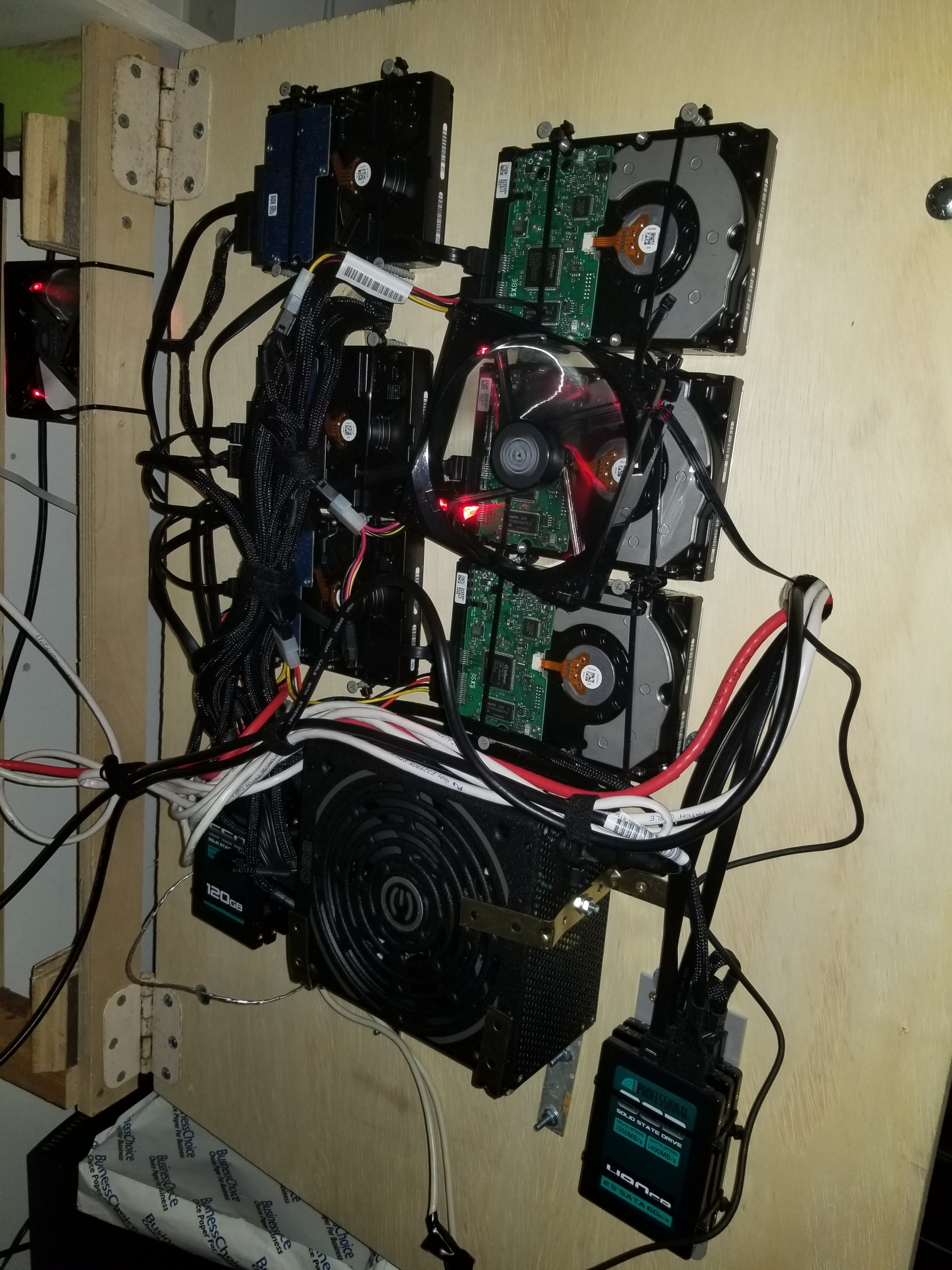 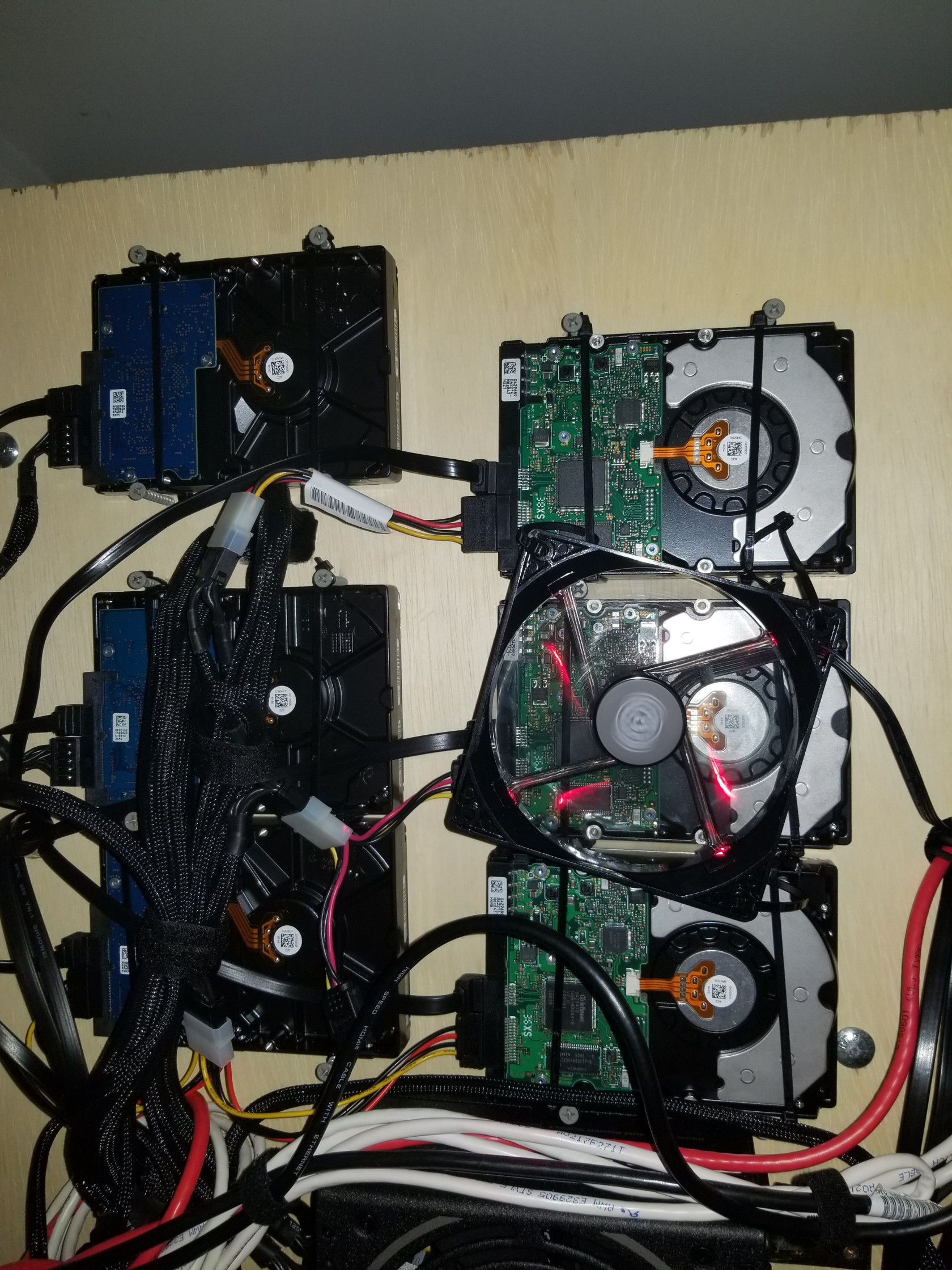 While open-air "case" can work, it's not a good idea to leave all the electronics exposed to elements. Sometime during the year, Newegg had a flash sale on a Rosewill L4000 4U server case for cheap, and so I upgraded the lab once more.

The components largely remind the same as before, just in a proper case now. 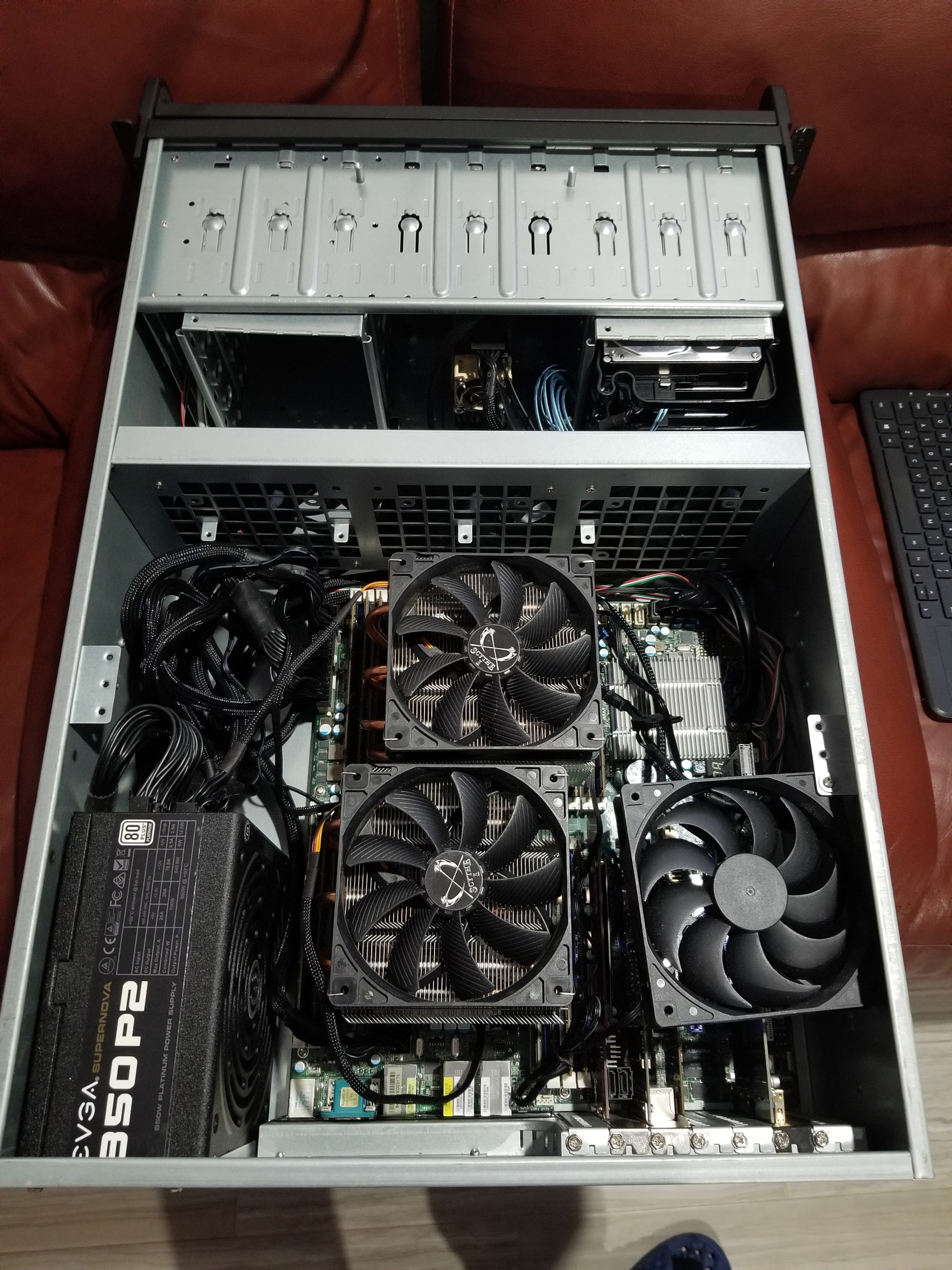 After discover the r/homelabsales subreddit, I was able to score a good deal on a Cisco switch, thinking it will help me studying for the CCNA in the future. This switch is the SG200-52P, which is a huge upgrade over the previous 16-Port Netgear switch, in terms of both functionality and more ports.

But server racks are still out of the question, due to both cost and lack of space. Janky mounting it is. 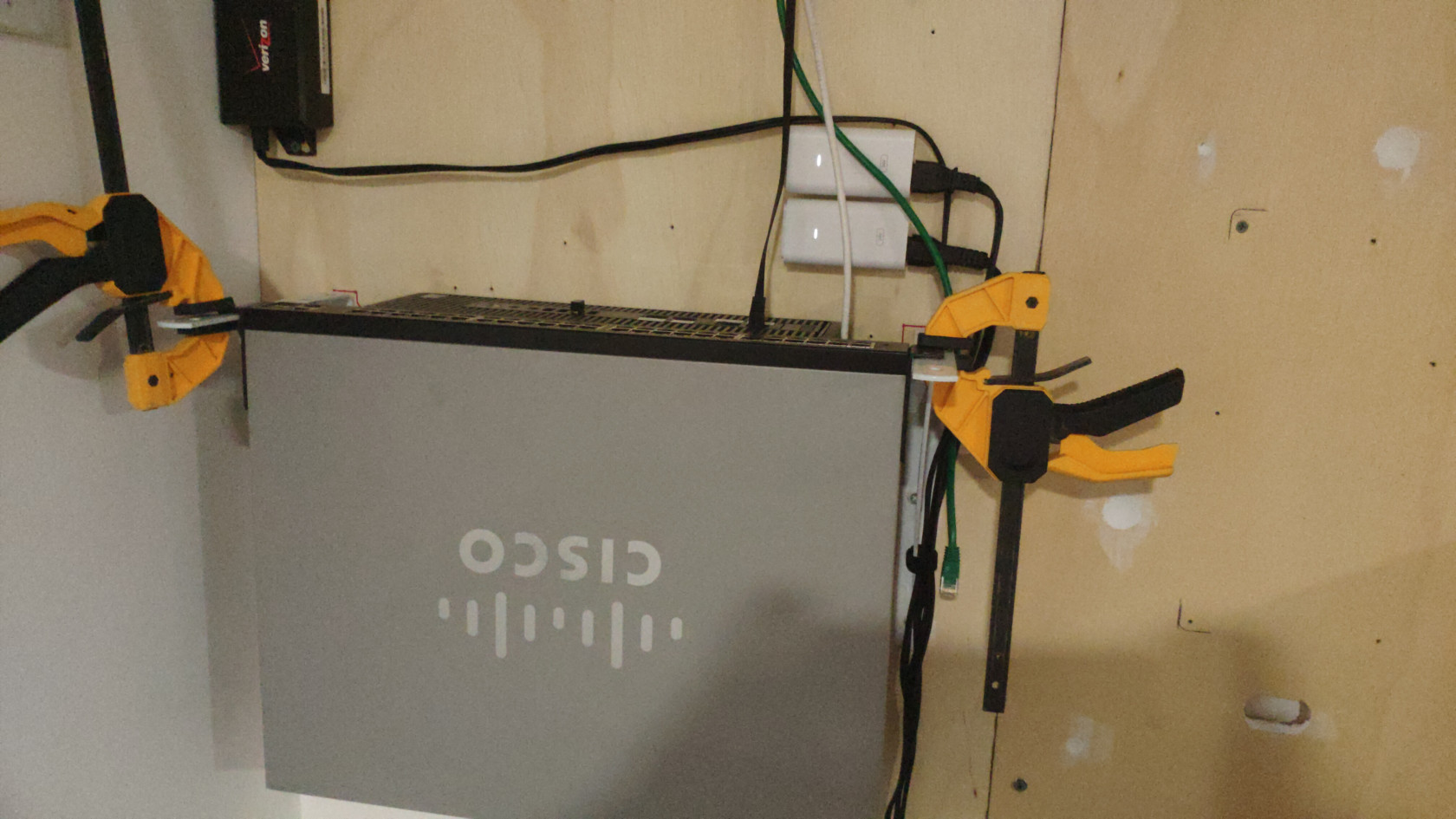 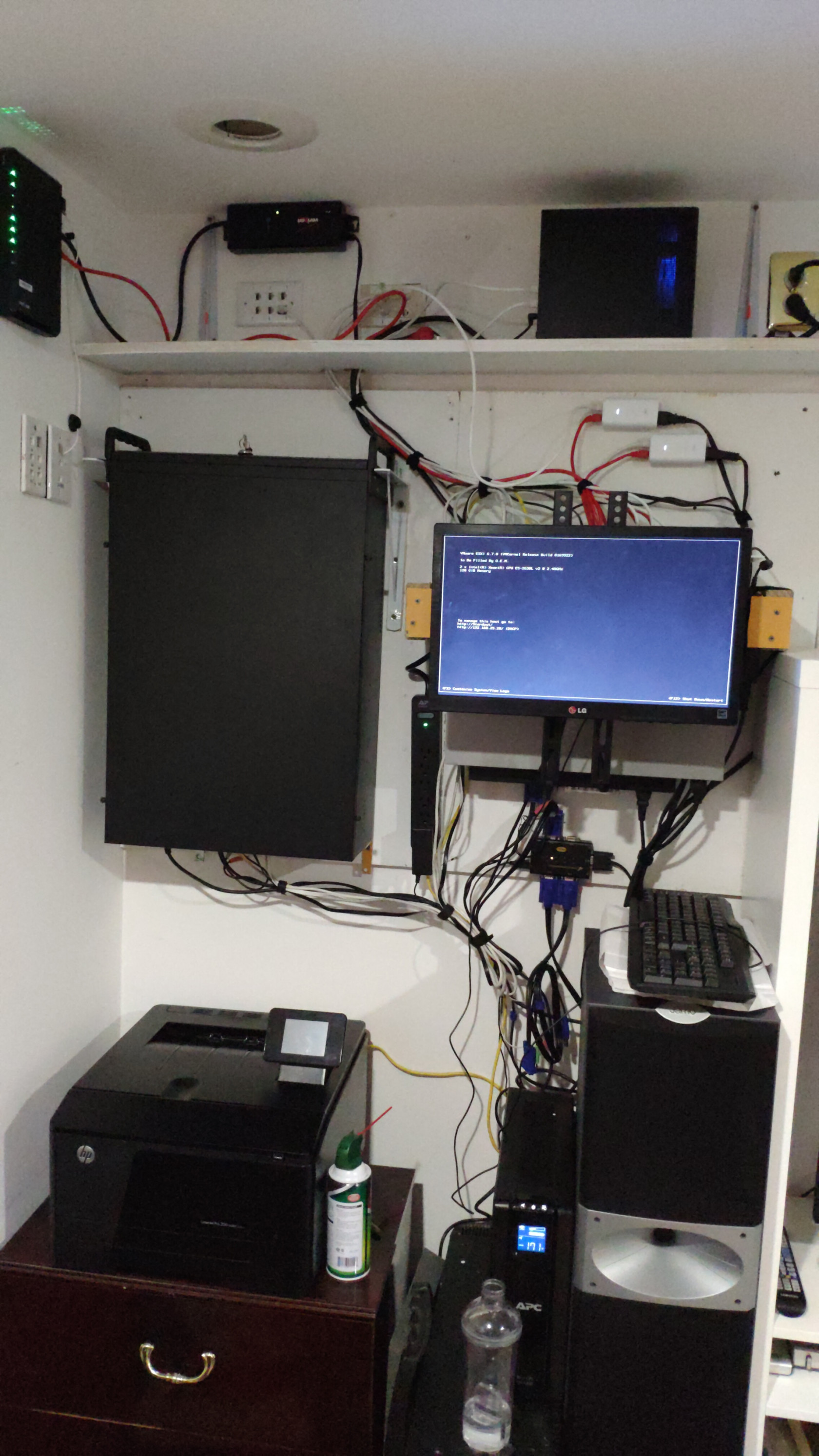 Lock down happened. What better way to spend the idle time than to DIY a wooden server rack?

The wooden server rack is made from 2x4s, which I got laying around, long before the pandemic skyrocket the cost of wood. 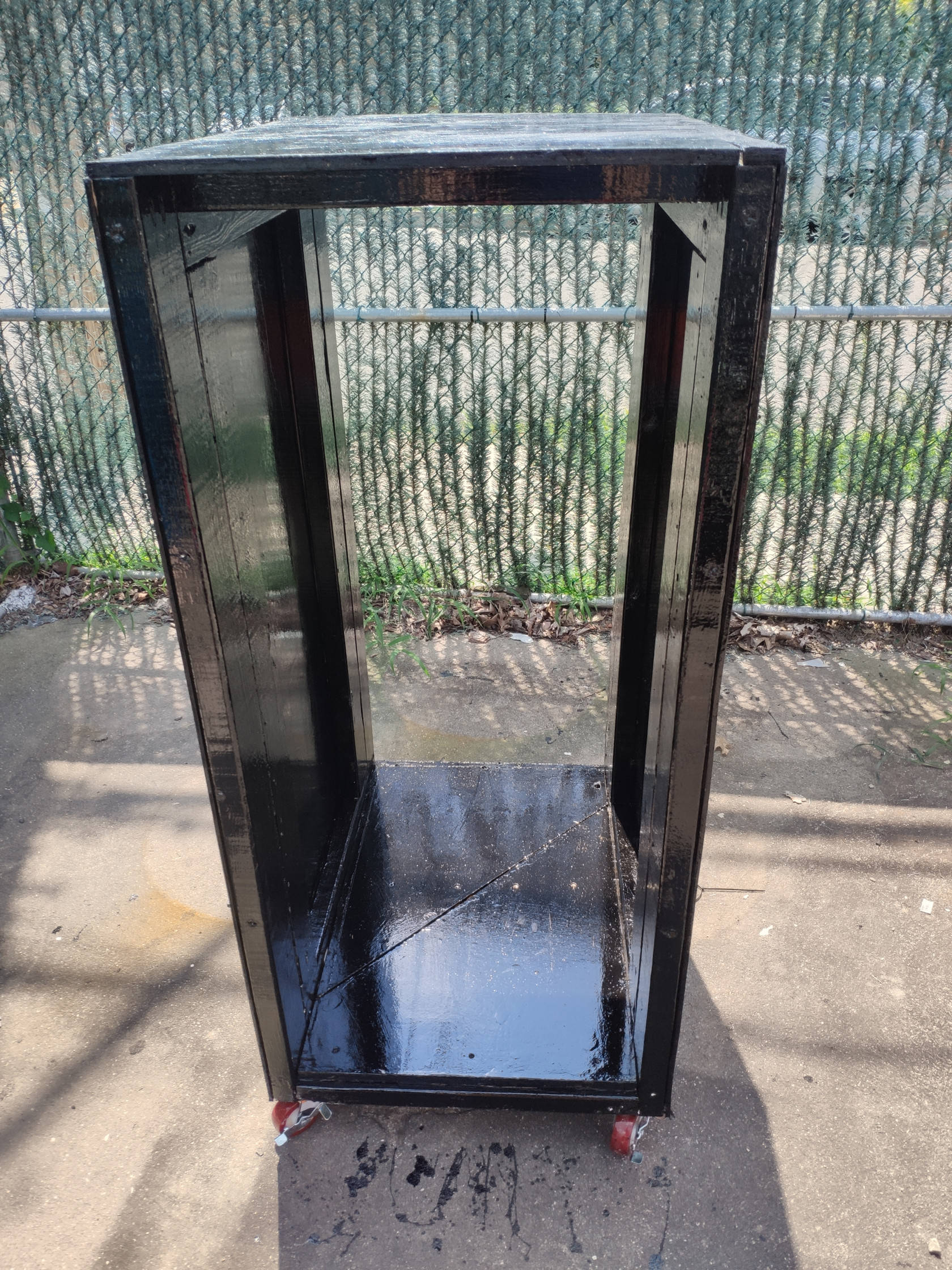 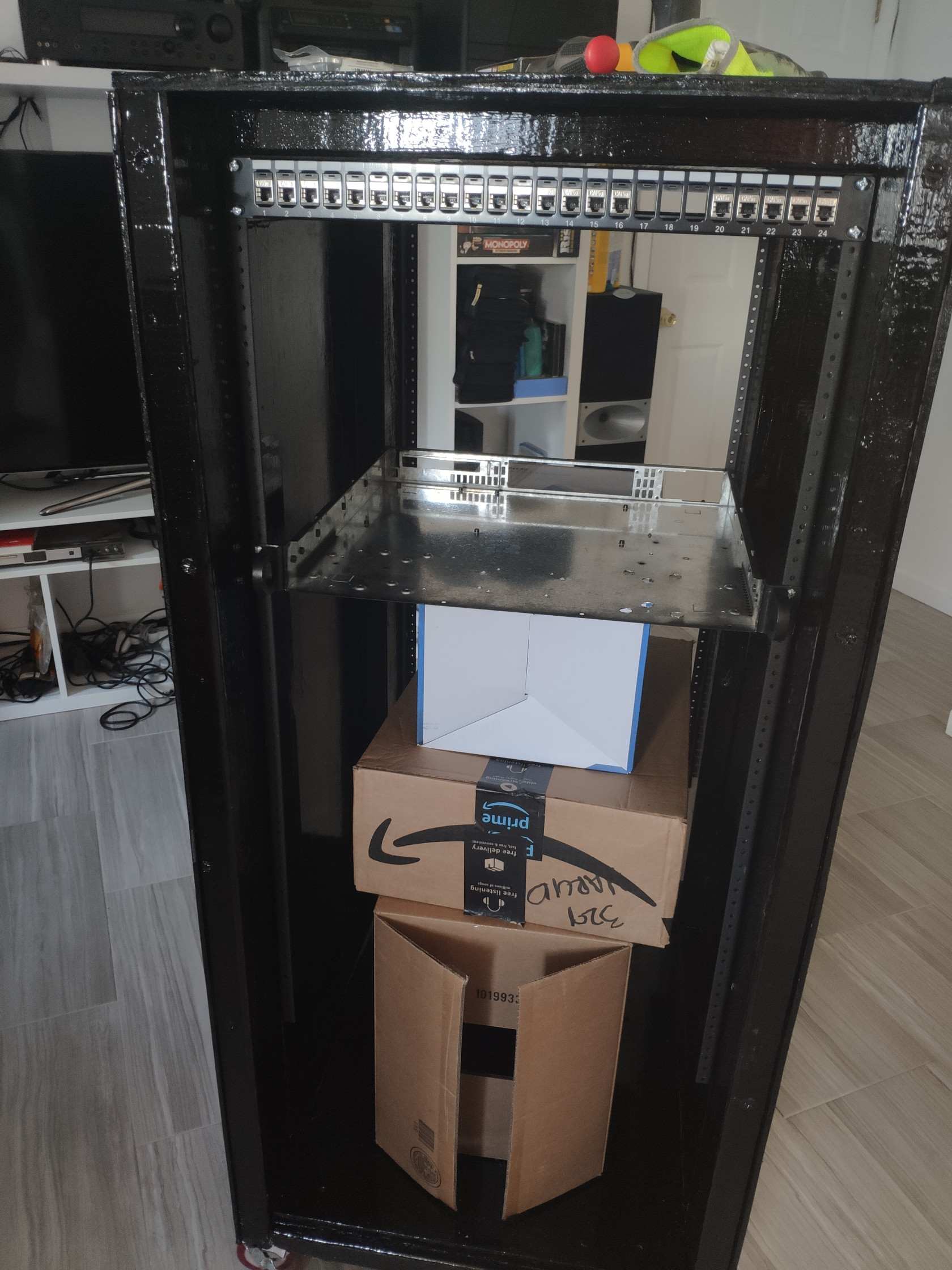 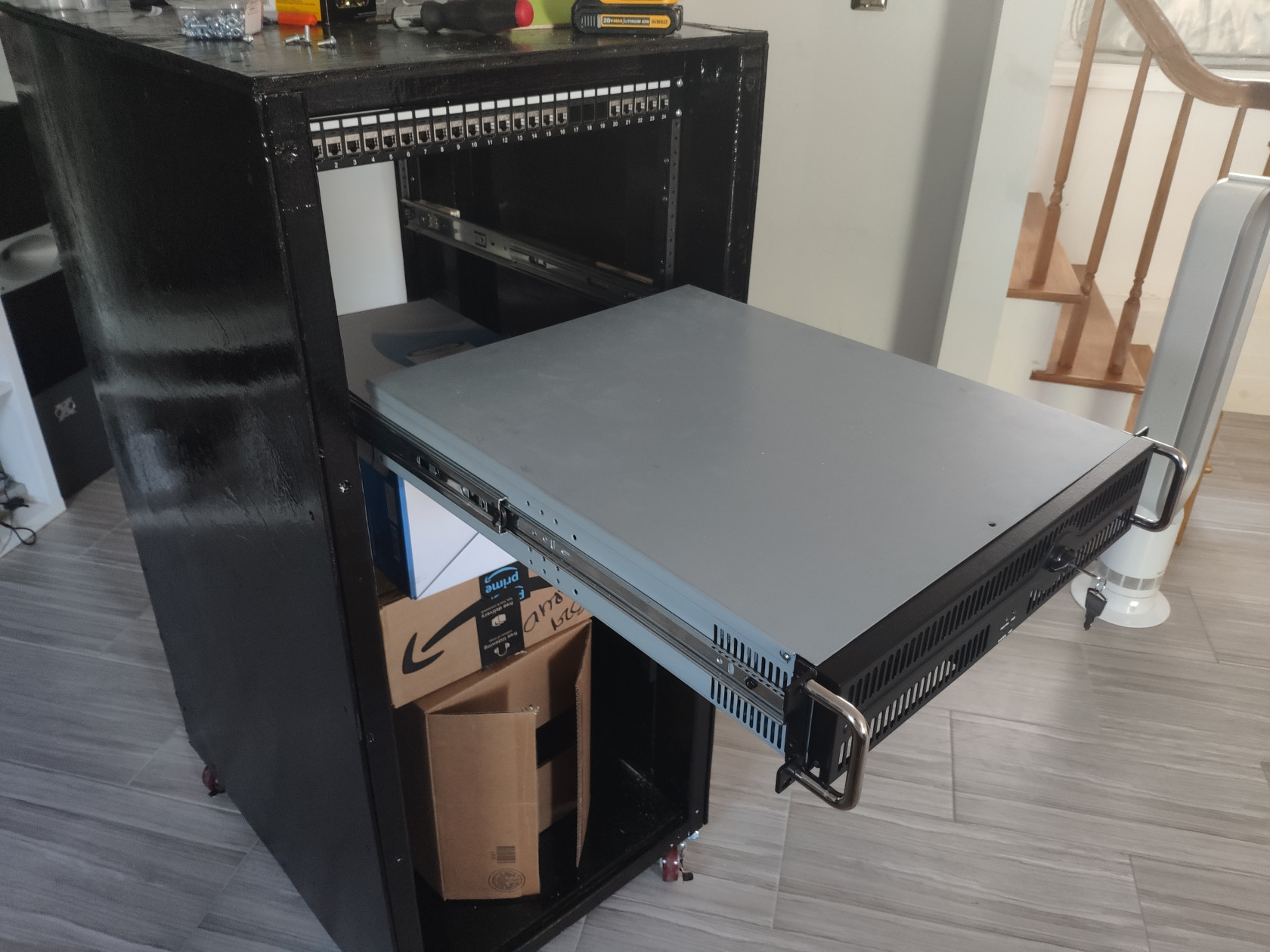 As COVID continues to rage on, my brother moved back home from college. His server equipment are added to the DIY rack.

Now there's one more 4U server, along with a few Raspberry Pi 3s.

Previously, I run Pi-Hole inside a VM on the ESXI host. With the Raspberry Pis as the physical Pi-Hole server, I don't have to worry about not having DNS resolution when I do maintenance on the ESXI Hosts. 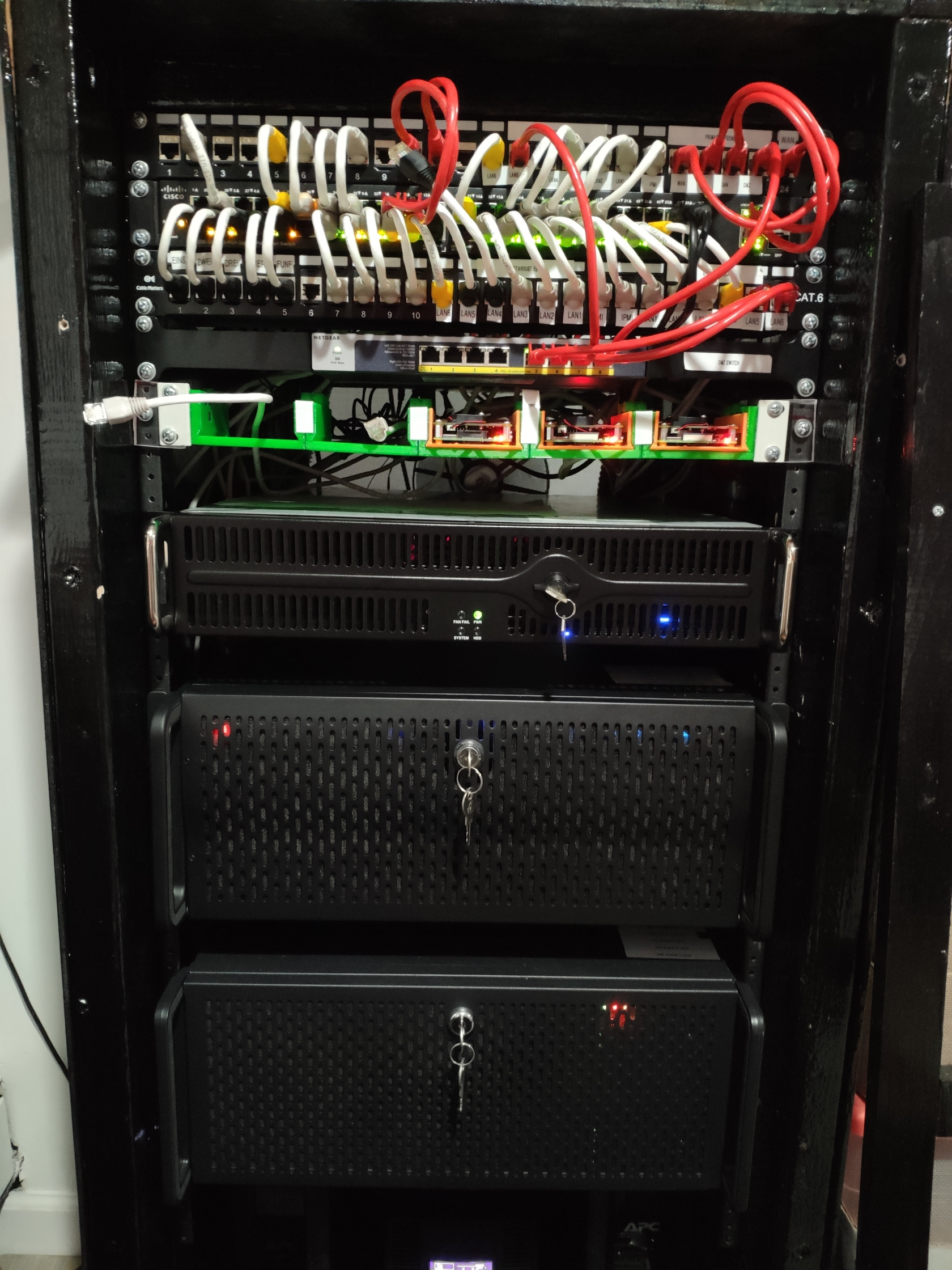 Shortly after vaccination was available to the general public, I switched job. The company was in the middle of an physical office migration and was getting rid of half-height server racks.

Of course I took one home. It is a very nice 25U rack. 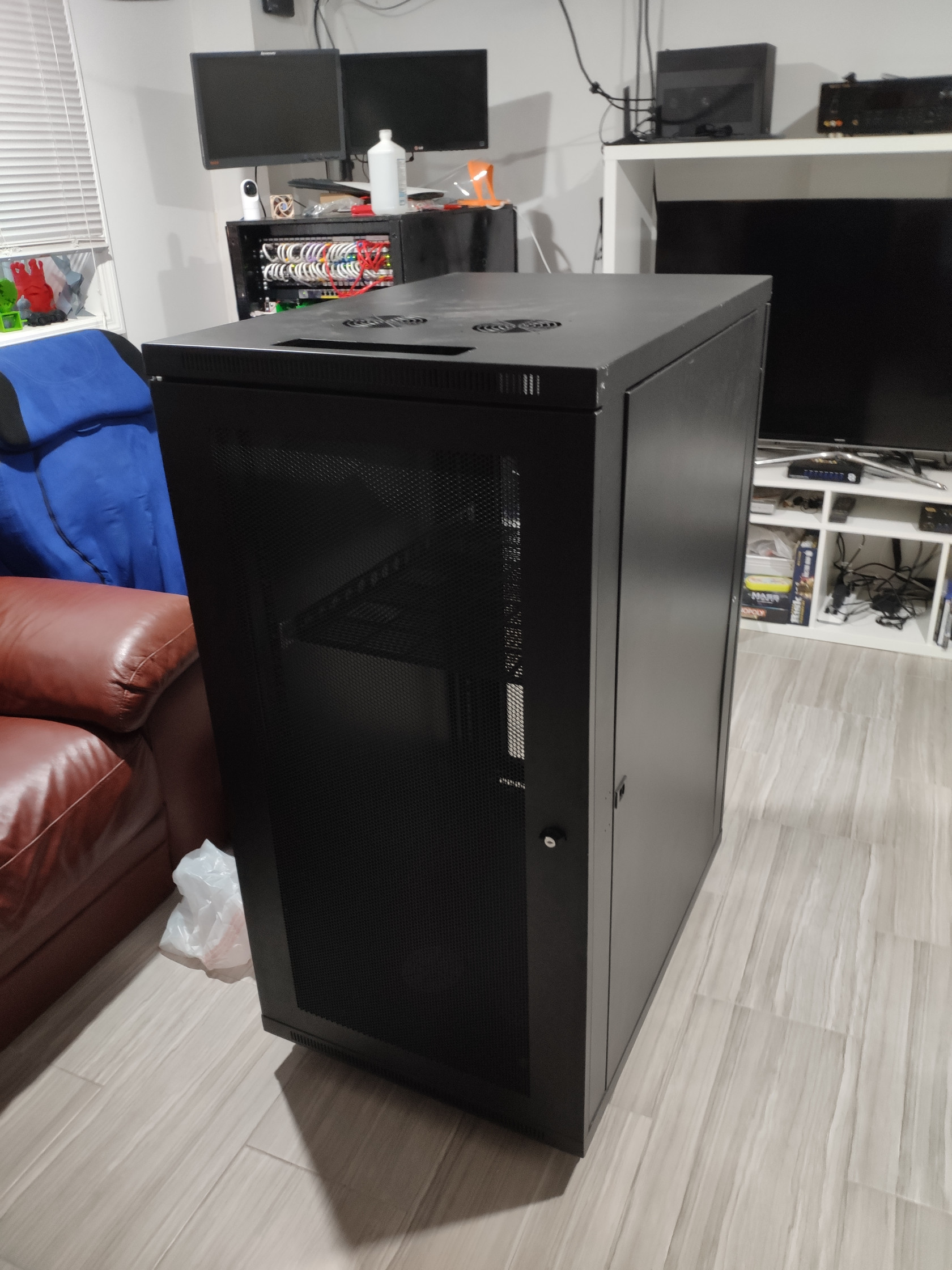 All hardware transferred over. 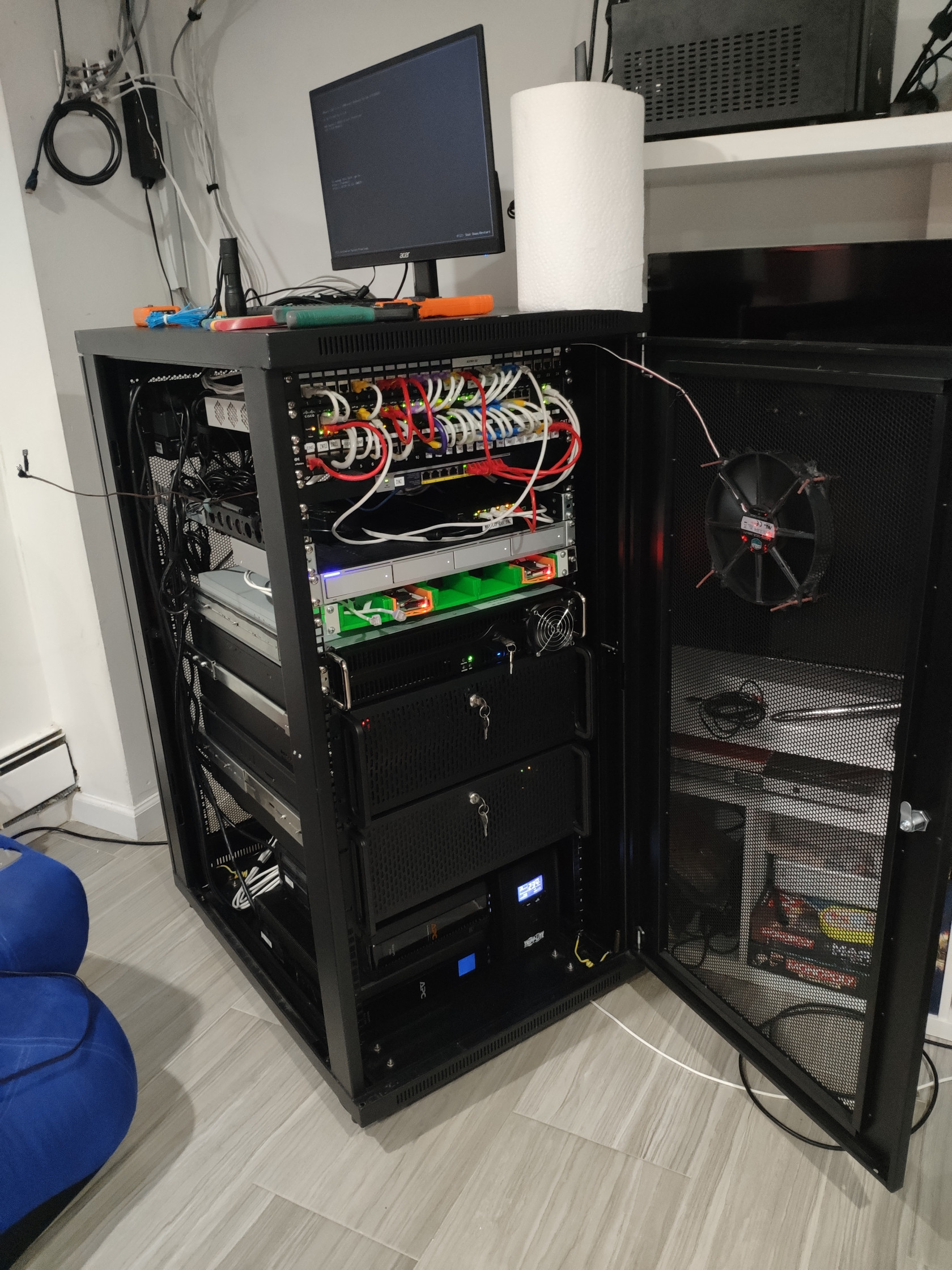 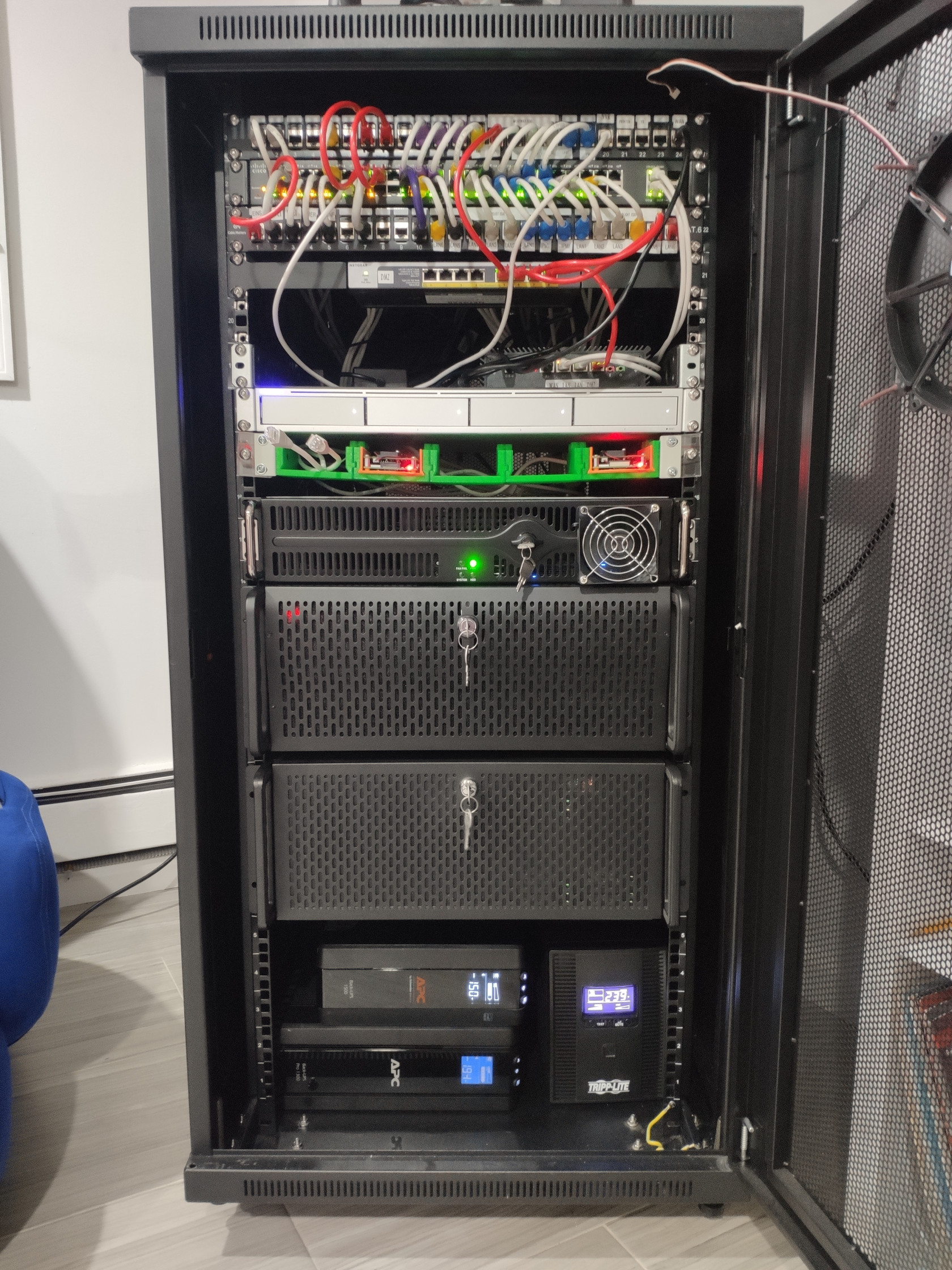 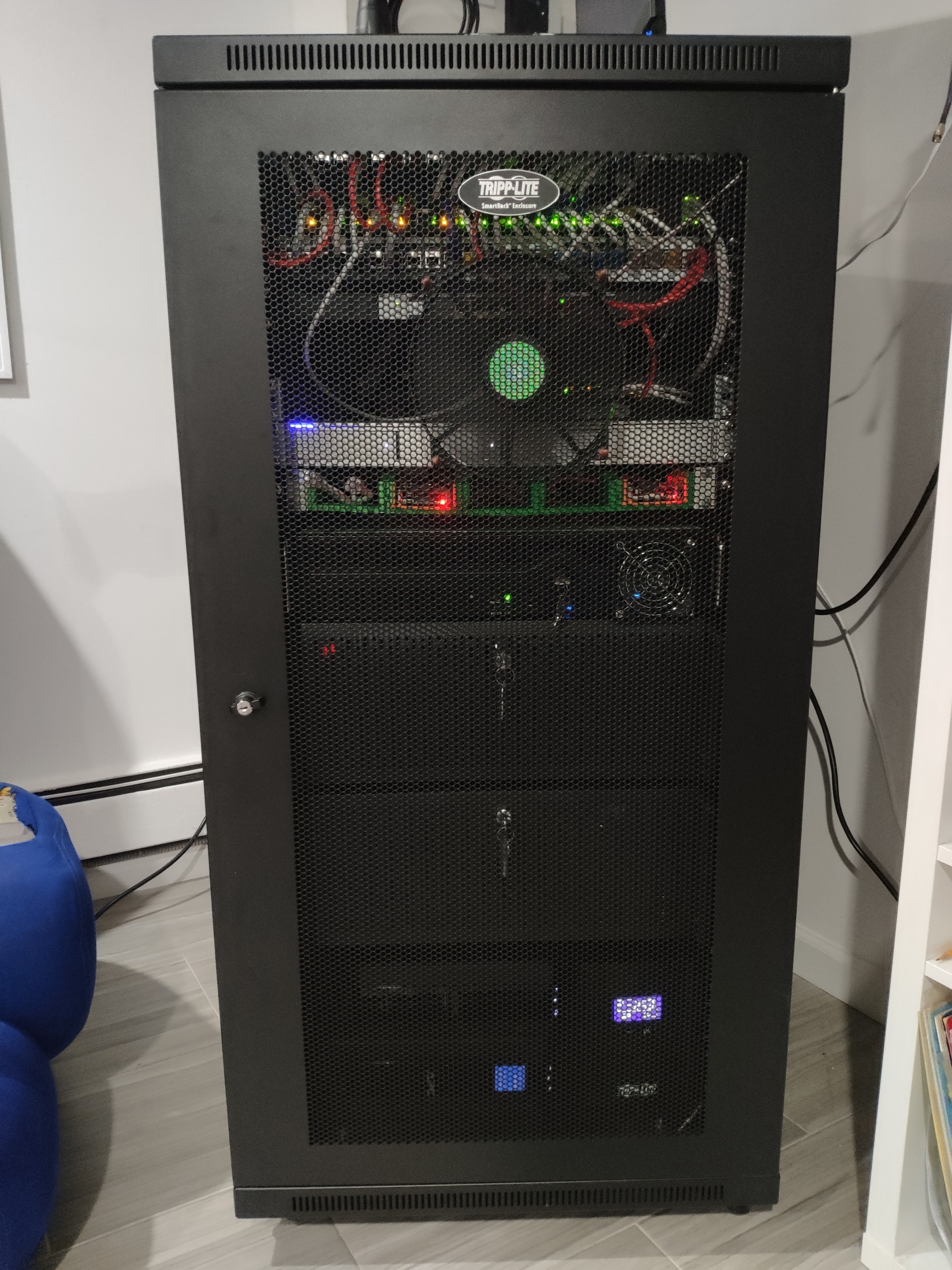 Safety first. Gotta make sure the fire extinguisher is close by.

Electricity cost are on the rise. At this point, the Ivy Bridge Xeon Processors are over 8 years old, and are drawing more watts compared to a more modern processor.

Time for an internal upgrade. A LOT of upgrades.

Is this even a home lab anymore? It feels more and more like a home data center instead. 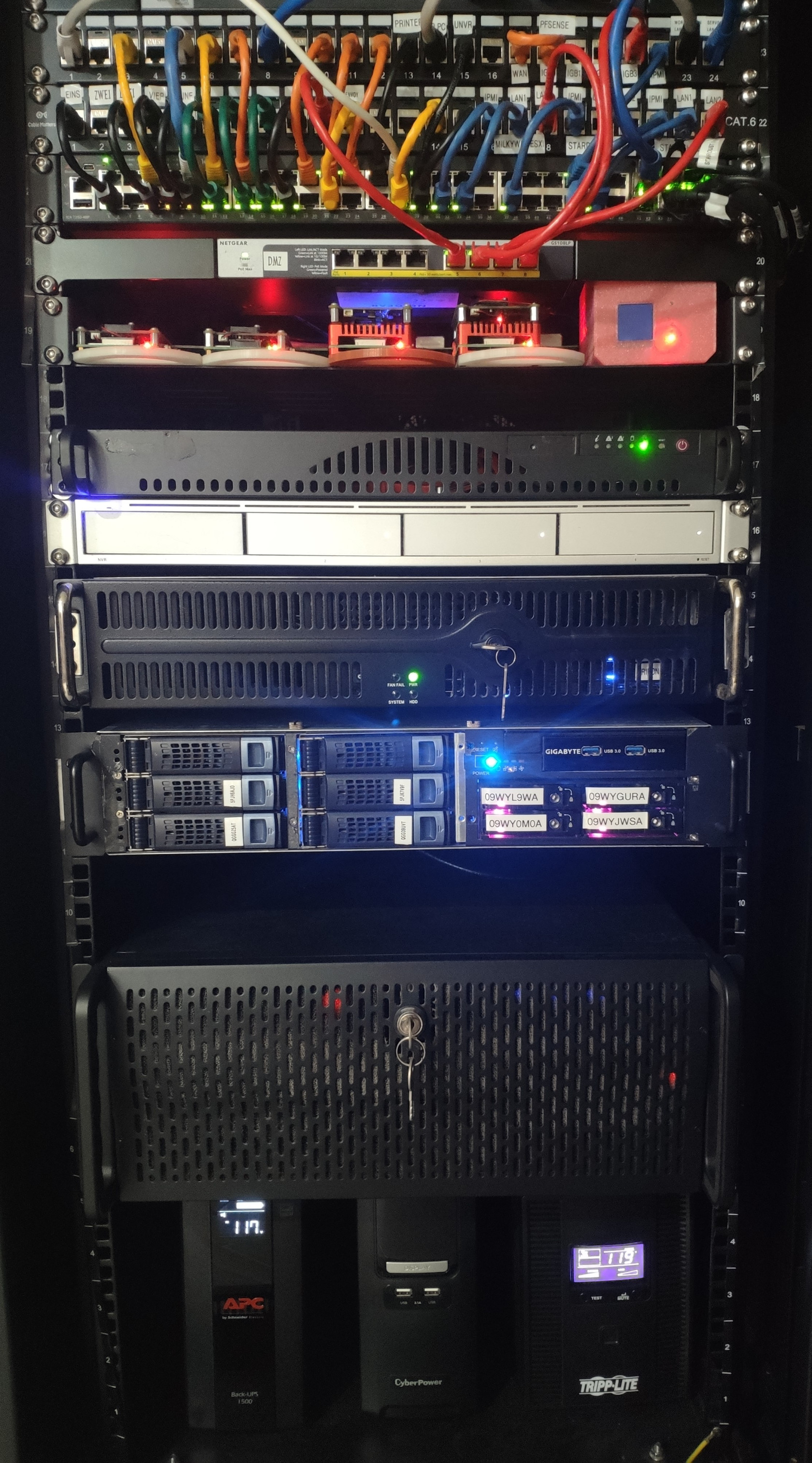 On the back, from top to bottom: